I began my process by writing out all the elements to my story. This way I can see the big picture and all the variables before I start organizing them and putting them in a specific sequence.

Then I drew my first draft. I included the physical movement of the student in the environment with the actions and sequence of the interface on their phone.

After this, I did some research to enhance my understanding of how the user behaves in the physical and digital environments. I found the floor plans of the University Center, and I took pictures of a student to simulate the scenario 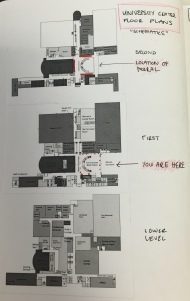 Then I began to construct my storyboard.

I included pictures of the actual environment with wire frame sketches of where the user would be in the app at each point (purple). The actions of the user in the app are included (blue) along with annotations of important objects or details that needed to be pointed out in the photos (red).

It was really difficult to include all of my ideas and thoughts into the whole picture so I did some reflecting afterwards. I think of this as an extension of the storyboard (possibly an inspiration or goals page?) where I communicate my expectations for the environment, the interactions, and the final take-aways for the user.