Studio Music is designed to have both a fun, interactive interface in the display on the wall activated by Nerf bullets and a more standard web interface that is powered with the database of Spotify.

Choose your songs directly from Spotify. 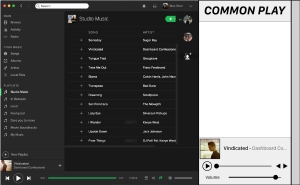 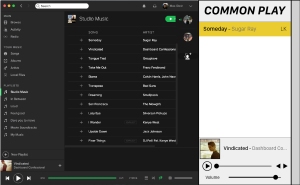 After all of the songs have been uploaded to the Common Play list, students can click on songs and either make them play next or delete them from the list. 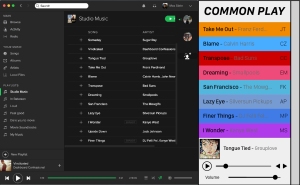 Part of the Studio Music experience encompasses listening to new music, however, if students listen to a song enough for it to be placed in the Tune Graveyard, simply tapping on the song can bring it back to Common Play.

The Studio Music application is designed to work alongside Spotify. I didn’t want the application to become a database itself with accounts and unnecessary information that music applications that have already been created offer. My original idea was “drag and drop” so I tried to stay true to that simplicity throughout the process of designing the interface. The music is colored based on the album cover that the songs come from.

As soon as a student shoots a song, that tile on the wall lights up green and that song begins to play. If you look at the first image of the interface and then the second interface image, you can see that “Tongue Tied” goes from second on the list to the song being played.

After a student chooses songs from Spotify and adds them to the Common Play they appear in a projected image on the wall as tiles. The tiles are meant to appear different sizes to different people depending on what song you added to the list. Songs that you uploaded are supposed to appear smaller so that you try listening to other student’s music. Each of the tiles are colored to match with the album cover they come from. 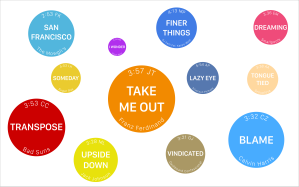 The music pops up onto the wall tile by tile. After a student shoots a song, the song will flash green to indicate that the song has been chosen. After a second or two the tile will return to its original color, just slightly darker as it is one play closer to being added to the Tune Graveyard. In order to encourage students to listen to new music, after listening to a song a certain amount of times, it will slowly get darker and eventually disappear and join the overplayed songs in the Tune Graveyard.

Some more of the process work I did in my sketchbook before I was able to come up with my final iterations for the project. 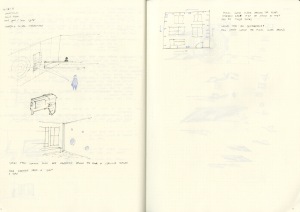